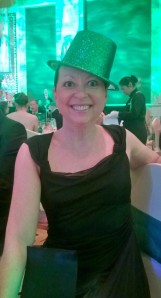 Or, as I call it, prom for grown ups who like to drink ALOT.  Thom and I attended the Shanghai Irish Ball at the Shangri La Hotel last night with our buddies from Trivia Night.  A table of mainly Brits enjoyed a fun-filled evening with entertainment galore, silent auctions/raffles and great food.  Oh, and unlimited booze which many took full advantage of until 4 a.m.  When we left after midnight, they were starting the second dinner service and the dancing/drinking was going strong.

I haven’t worn a long gown for many years but loved being able to dress up fancy and step out with Thom, who never did get around to getting a tux made but looked handsome in his bow tie and black suit.  Next year he wants to wear a kilt.  For the ladies, it’s all about the pictures and everyone was taking photos on the balcony overlooking the Bund.  I narrowly avoided catastrophe when I just missed tripping on a spotlight illuminating the huge shamrock.  Visions of broken bones and teeth still haunt me as I realize the close call I had as I fumbled over it in high heels.  But, God was watching over me and we proceeded to take photos for another couple in exchange for them capturing our moment as well. Everyone thought our Windows Nokia Lumia Phones took better pictures than their iPhones-of course!

The food was very good if you consider trying to serve about a thousand people simultaneously.  Shrimp/tuna to start followed by pastry encased mystery soup (they said it was French Onion but no way did it taste like that) and then on to filet mignon and a delightful chocolate mousse to end.  And, of course, wine/champagne/Bailey’s/whiskey–which our table of Brits took full advantage of all night.

After dinner, we kept checking out silent auction items to ensure we were final bidders.  Thom was unable to secure the gorgeous handmade console table he wanted, though I don’t know how we would have gotten it home.  We did get a lovely rice basket and a painting that many thought was ugly but we loved.  Our taste is definitely off center when it comes to art.  Having bought last minute raffle tickets, we were surprised to win the 2nd prize of a spa/hotel/food/pearl package that included randomly a set of Irish socks as well.  NICE!  Of course, someone had stolen the pearls out of the bag so they have to go buy some for us.  Not holding my breath on that one but the rest of the stuff is very nice.  First prize would have been more awesome as it was a trip to Ireland.  Next year!

2 thoughts on “Fun Times at the Irish Ball in Shanghai”