India.  Never really thought I would travel here but, as with China, life takes you to unexpected places if you open yourself up to the possibilities.  Of course, with these adventures come the acrid stench of pollution so prevalent where the government doesn’t regulate air quality.  Waking up in Delhi, my eyes and throat are already burning at the 200+ AQI “haze” outside which hangs over the bleak landscape of the local neighborhood outside my hotel room. 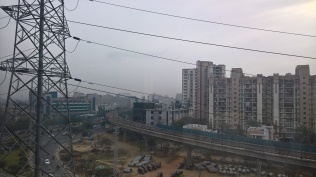 On the trip leg from Amsterdam to Delhi, the India culture was evident immediately.  Snacks on the plane were nothing I had ever heard of vs. the usual pretzel/peanut offerings.  I’m still not sure what it was as I am following a strict “never eat on plane” routine to protect my weak stomach.  I looked on as people enjoyed their snacks and dinners and I ate my protein bar.  Boring but necessary.

As I travel, the hot beverages I enjoy tend to move to tea vs. coffee with the electric tea kettle always available.  French press for coffee was the option in New Zealand and also offered in India.  I use  only bottled water, of course, for all beverages so that my Imodium stash is not needed.  Milk is not readily available everywhere so powdered cream is the alternative.  I’ve already gone through my supply of bottled water and had to ask for more.  Even when brushing your teeth, you MUST use bottled water or die.  Seriously.

Enjoying a very Western waffle/juice/coffee room service breakfast on Sunday morning, I am watching The Voice.  Seems that India, like China, is in love with music reality shows.  I remember watching endless reruns of the The Voice in Shanghai and Delhi is no different.  Back-to-back episodes are running while I rest up from the long journey to get here.

Entering the hotel compound around 1:30 a.m. on a Sunday morning, the streets were still busy with many enjoying food carts on the side of the road, which would kill me but Thom would have enjoyed.  Rat or cat, Thom can and did eat everything in China and never got sick.  Never questioning the “mystery meat on a stick”, he will miss out on the India delicacies offered.  So sad because I always lived vicariously through his cast iron stomach.

Staying at The Westin Gurgaon, we had to pass through a guarded gate where our car was searched. Upon pulling up to the hotel, we had to have our bags scanned outside just like at the airport and walk through a metal detector and be hand scanned by a security guard.  WOW.  I would imagine a Western hotel like this could be a target for terrorism so high security is appreciated.  I will not be wandering out of the hotel tomorrow as I normally would when I hit a new country.  While I do look forward to seeing more of India, there is some unrest with election results coming out this weekend and other issues so I’m just going to play it safe this time.

Tomorrow, our first day to work in Delhi, should be interesting.  I just received this SOS travel warning:  “Members in the capital Delhi and the adjoining National Capital Region (NCR) on 20 March should expect significant travel disruption during planned protests by the ethnic-Jat ABJASS group. ABJASS, which has been campaigning for quotas for Jats in state government jobs and educational institutions, has threatened to block the prime minister’s residence, the parliament building, and all highways and roads in Delhi on the day if its demands are not met. Tens of thousands of protesters are expected to attend the 20 March rally with tractors. ABJASS has threatened to block all lanes and transit points into Delhi if the security forces prevent them from entering the city. A heightened security force presence should be expected around the prime minister’s residence and the parliament building, as well as on all roads into Delhi and near the Jantar Mantar monument.”

Though I miss him so much already, it‘s probably best that Thom is not on this trip as I can just see him now taking photos of the protests and joining in to get in all kinds of trouble.Good times in India!  Stay tuned.